Song of the Splintered Lands available at Origins! 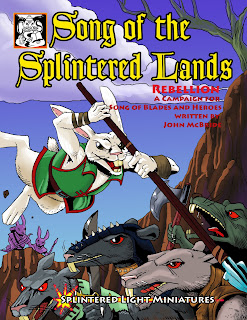 Campaign Rules for two different rebellion scenarios and for
building and defending a ‘strategic hamlet” in disputed territory;

More Fog of War with rules for variable strength warbands
and variable missions with dummy markers and scouting;

Cultural Background for the Druid’s Wyldewood, the dwarves of
Mountain Home, and the goblin races of Moonglade;

New Races including the Druid’s Children -- talking and tool-using
animal species including hares, hedgehogs, moles, shrews, squirrels,
foxes, and others;

Kid friendly, this is a great game system for father/son (or parent/child) gaming. Prizes for all participants.
Pubblicato da Ganesha Games a 13:34